It consists of the following plants: 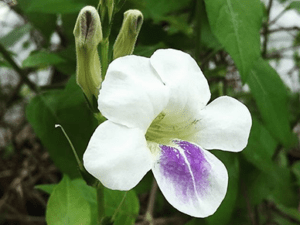 Benjarong 5 colors has many names such as Busaba Rimthang, sweet gourd, sweet and spicy, it is also called as a purple herb. It’s both a vegetable and a herb. Medicinal properties of Benjarong 5 colors help relieve pain and swelling, relieve joint pain, deworming, relieve asthma. The stem is used to treat rheumatism. Benjarong’s roots 5 colors are used to treat skin rashes. The most popular to use is to cure diabetes. Benjarong is a herbaceous plant. Leaves are single, heart-shaped, opposite each other. The upper leaf surface is oily. The bottom has soft fur. Concave or concave, pointed leaves, a bouquet of flowers at the end of the branches. The florets are cone-shaped, connected to form a tube. The tip is separated into 5 petals, which are purple, white or yellow. Delicate villagers often think that it is a weed. Because it propagates very quickly, bejarong flowers come in many colors, pink, white, yellow, but some species have 2 colors in one flower. It is a legume plant. The flowers are in a bouquet of flowers on one side. lanceolate leaves 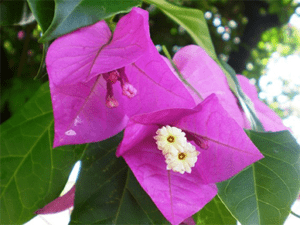 Fuengfah is in the Banyen family. (NYCTAGINACEAE) Bougainvillea, there are other local names as flowers, different leaves (Bangkok), paper flowers, agave (North), Chinese New Year (Central), Ye Zihua, Zhi Sanhua (Central China), etc. Bougainvillea is classified as Semi-evergreen shrubs live for many decades Can slither up to 10 meters. The nature of the canopy can be trimmed and can control the direction of growth. The trunk is round, large, hard, skin is gray or brown. Stems are brittle and easily broken. There are thorns on the trunk above the leaves. Thorns are approximately 0.5-1 cm long, propagated by grafting, grafting, and plugging. They grow well in well-drained sandy soil. Likes low humidity and full sunlight. Bougainvillea flowers bloom in clusters at the leaf axils and at the ends of the branches. There are 3 flowers with many colors. 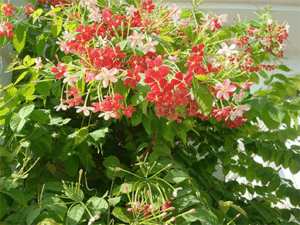 Nang fingernails have other local names as Ai Chang (Uttaradit), Samae Daeng (Chumphon), Leb Nao (Satun), Majee Mang, Chamang Jamang (North), Narai’s Finger (South), Tai Maung (Karen) – Mae Hong Son), Wa Doning Adorning (Malayu-Yala), Nang Ton’s fingernails, etc. Nang Ton’s fingernails Native to tropical Asia. It is classified as a medium-sized hardwood vine. It can slither around with other trees, about 5-7 meters long and may climb more than 10 meters, breaking branches into dense thickets. The young vine is green. The stems and young vines are covered with yellow or grayish-brown hairs. but the old skin will be clean by the vine, the bark of the trunk is reddish brown The bark is quite smooth. or a little thorn need to find a anchor or a shop for the trunk to have a place to hold Propagated by seeds, grafting, or rhizomes can be planted. But the pod must be about 4 inches deep as an outdoor plant. like full sun It needs moderate water and humidity. It grows well in sandy or sandy loam that drains well. 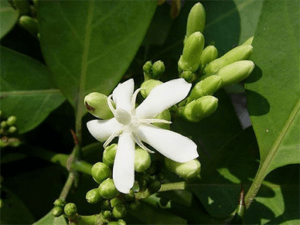 Kao Kao has other local names as Chi Kao, Chi Kao, Yotaka, Nam Lid Khao (Chiang Mai), J Kao Phaya Foot Wai (Kanchanaburi), Kad Kao Thorn (Chaiyaphum), Kad Khao Krua (Nakhon Ratchasima), Ket Khao (Northern Region), Kad Khao Khan. Kao (Northern Region, Northeastern Region), Kao Kao Kao (Central), Kao Kao (Southern, Southwestern), Chi Khao, Cat’s Claw, etc. The Caucasian tree is a plant that originated in Thailand. and in Southeast Asia It is classified as a hardwood vine or shrub waiting to creep up. It is about 3-6 meters tall, the bark is smooth and brown. Characteristics of long and crooked stems Often draped over trees and branches. If there is no clematis, it is a semi-perennial ivy, similar to cat’s milk. According to the trunk Which will have leaves growing into pairs and will have sharp thorns bent out of the base of the leaf resembles a pair of buffalo horns. which is unique to this type of wood Propagated by seeds, cuttings and grafting. but is popularly propagated by seeds because it germinates easily And the seedlings obtained from the seed will be strong and grow faster. Requires very little water to grow. It can grow well in full sun and moderate shade. And often grow naturally in mixed forests in different regions or by gardens or in the wilderness. Or often planted in the house or in the temple to make some medicine, there are. 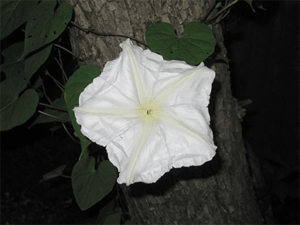 It is native to the tropics of Central and South America and is widely distributed. It can be found in both temperate and tropical regions of America. Australia and in the tropical countries of Asia Chomchan has beautiful white flowers. It blooms at night and smells good. In foreign countries, such as in Europe and the United States, it is grown as an ornamental plant. But some areas of Thailand, such as the southern and northeastern regions The flowers began to be eaten as food by using the flower buds to fry with oyster sauce. or poached with chili paste The results of the nutritional value analysis of chrysanthemum flowers Found that it is a vegetable that is very low in fat and has mild laxative properties. Suitable for those who want to control weight. It also contains iron. Phosphorus and also contains various vitamins such as B vitamins, etc. 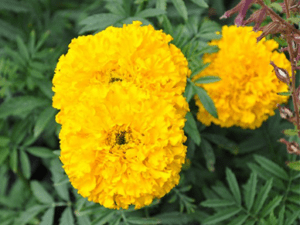 Marigolds are classified in the Sunflower family (ASTERACEAE or COMPOSITAE). Marigolds have other local names as large marigolds (general), Kham Pu Zhu Luang (Northern Region), Por Tu (Karen-Mae Hong Son), Buang Xiu Kek (Teo Chew Chinese). , Wan So Jue (Mandarin), Liu Chek, Cao Huang, Kim Kek (China), American marigold, etc. Marigolds are native plants of Mexico. It is classified as a herbaceous plant with a lifespan of about 1 year. The trunk is erect with a height of about 60-100 cm, with many branches at the base of the tree. Stems are green and furrowed. The whole plant, when crushed, will have a foul smell. Therefore, insects are rarely disturbed. by classified as outdoor plants Propagated mainly by seeds. (but may use cuttings but the resulting plant is smaller) grows quickly, prefers loamy soil with good drainage moderate humidity and likes full sunlight all day The flowers are bright yellow or orange. The petals are large, stacked in several layers in a circle. 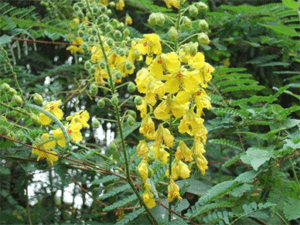 Other names: Grandfather’s Vegetable, Grandfather’s Thorn (North), Slow Blood (Middle), Thanao Song (North), Grandma’s Lettuce (Prachinburi), Vegetable Khaya (Nakhon Phanom), Kaya Vegetable (Loei), Grandma’s Vegetable is a vine. Stems erect or slithering thousands of other trees, more than 1 meter tall. The trunk has many sharp thorns, both the trunk and the leaves are composed of feathers. In pairs, the petioles are 25-40 cm long. The leaflets have 10-30 pairs and 10-20 pairs of fissures, 4 mm wide. Red petioles with sharp thorns along the branches. The flowers are inflorescences 20-40 cm long. Yellow flowers bloom in winter. Flowers 1.2-2 cm long. Width 1-1.8 cm. It is a flat sheet and a pointed tip. The fruit is a thumb-sized pod, containing 2 seeds, leaves and inflorescences with a strong pungent odor. resembling the smell of a real jellyfish or a horseshoe 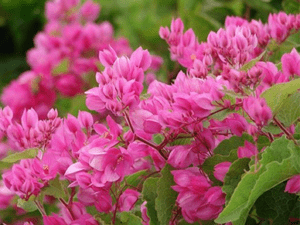 Phuang Chompoo has other local names as Chomphuuang (Bangkok), Horned Nak (Pattani), Phuang Nak (Central), etc. Phuang Chompoo originated in Central America. Found in Mexico Classified as a creeper with a small soft vine. but the base part is very strong The vine is light green. Has a hand to hold onto a thousand trees or other branches for balance. And can wiggle a thousand things to a distance of about 40 feet. Propagated by seeds, cuttings and cuttings. Phuang Chompoo is an outdoor plant that needs a lot of sun. moderate water requirements It grows well in almost any soil with moderate humidity. It is commonly grown as an ornamental plant in the tropics. but in some countries it is found as a weed The inflorescence is a panicle, it is branched into the axillary, axillary branches and at the apex. Branches about 1-5 cm long, the end of the bouquet is for the island to attach to other things for support. The flowers are in clusters along the branches. The flowers are sometimes white. Maybe it’s pink old and young But most of the flowers are pink. 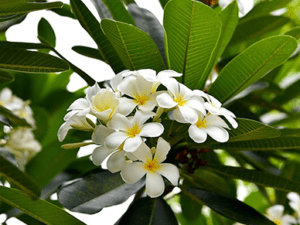 Plumeria or Plumeria is a perennial flowering plant native to Central America, Mexico, the Caribbean and South America. In our house, we have an ancient belief that Lan Thom should not be planted in the area of ​​the house. because of its unfortunate name because it coincides with the word “sorrow”, which means sorrow and sorrow But it has been changed to a new name instead, which is “Frangipani” which is a royal name from Her Majesty Queen Sirikit. Her Majesty the Queen which means “Flowers with beautiful posture and delicacy” and nowadays the frangipani tree is popular and widely planted. Plumeria has a common name Plumeria, Frangipani, Temple tree, other local names are Champa, Chong Pa (Kanchanaburi). , Champa Lao (North), Champa Khao (Northeast), Champa Khom (South), Chinese wood (Yala), Moi (Narathiwat), Champai (Khmer), etc. 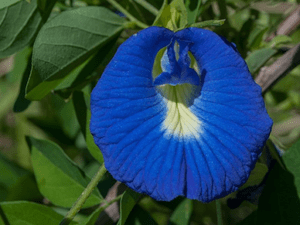 Butterfly pea is classified in the bean family (FABACEAE or LEGUMINOSAE). Butterfly pea has other local names as Red Chan (Chiang Mai), Orchid (Northern region), etc. Anchan is a plant that originated in South America. commonly grown in the tropics Characteristics of butterfly pea flowers are white, blue, purple, and the middle of the flower is yellow. and shaped like a scallop has unique properties because there is a substance called “Anthocyanin” (Anthocyanin), which is responsible for helping to stimulate blood circulation. make the blood supply to different parts better, such as to feed the hair roots Which helps to make hair black, shiny, or to feed the eye area, thereby helping to nourish the eyes as well. or to feed the fingertips This will help relieve beriberi as well. And most importantly, this substance is also outstanding that many people do not know, that is, it can help reduce the risk of clogged arteries, and “eat pea flowers every day… one flower a day” will help prevent coronary heart disease. Brain constriction, too.